Mount Kilimanjaro is the tallest mountain in Africa. It rises 5895 meters above sea level, and it is the highest free-standing mountain in the world. It is a volcanic mountain, meaning that it was formed through successive volcanic eruptions, as opposed to mountains like the Himalayas which were formed through tectonic activity. Mt. Kilimanjaro is one of the largest volcanic mountains in the world. With an area of 756 square kilometres, Kilimanjaro National Park was established in 1973 to preserve the mountain's outstanding scenic features and its flora and fauna.

In August of 2007 I was amongst a team of 28 trekkers that made a successful attempt to reach the summit. If you click on the picture it will show you to the pictures I took during the trek. 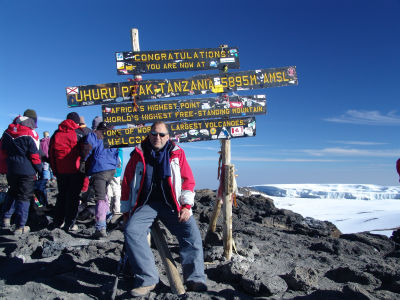